← back to
Portage Garage Sounds 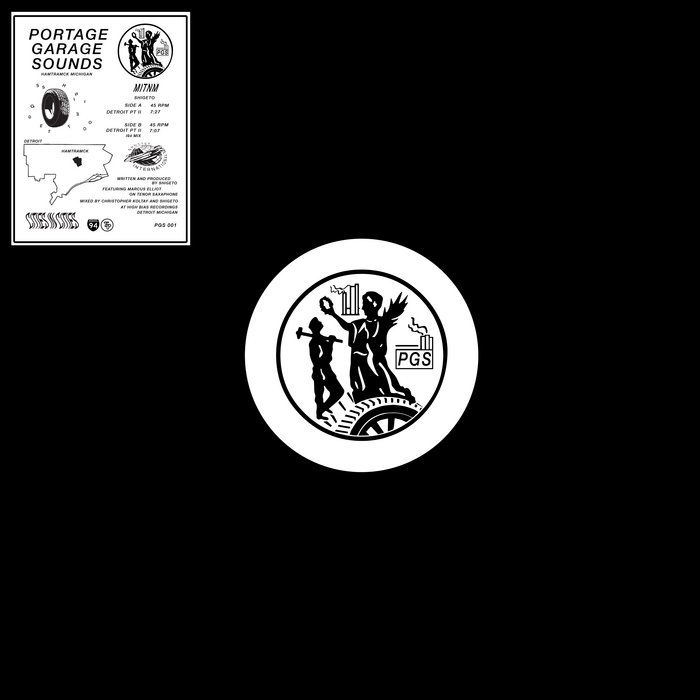 *Due to limited quantity available, we kindly ask people to not order more than 2 copies and encourage the purchasing of 1 copy:) We will cancel orders that exceed 2 records*

Following Saginaw's life of performing jazz, it is only fitting that "Detroit Part II" should evolve out of a jazz gig. "I was putting together a show at the DSO with a live band. The event was at capacity. Marcus (Elliot) couldn't get in. 30 minutes before the show, (Bassist) Josef (Deas) starts texting Marcus, and we have the idea to get Marcus in–by playing with us," Zach Saginaw said. The drop-in of a live saxophonist, unplanned, was a beautiful moment. "Marcus literally breathes life into the song."

The a-side, "Detroit Part II", feels like a neighborhood party or an evening on the front porch. "Detroit Part II" features live, swinging percussion, sultry, dark vocals, a fat Juno bass line and the summertime warmth of a tenor saxophone.

If "Detroit Part II" is an early summertime evening, the b-side's "I94 Mix" sounds like 4 a.m. at an after hours rave. Dubbier, funkier and heavier, the saxophone becomes muted and sampled, with feverish swells boiling to the surface. The bass line becomes hypnotic; shakers guide every movement and beat.

"We're just trying to break even and have a good time."

Portage Garage Sounds (PGS) is record label based in Hamtramck, MI, founded in early 2017 by brothers Benjamin and Zachary Saginaw. PGS is a self-actualization of a years-in-the-making goal.

"Our passion, our parties and our fun unintentionally transformed into something greater–meaningful work."

Years ago, Ben started curating shows in their native Ann Arbor; Zach moved to Brooklyn and started touring the world over as Shigeto. As time went on, Ben moved to Detroit, and Zach joined him. Living together, their momentum increased; live shows and DJ nights developed with friends, and a community emerged around them. PGS is an evolution, a step forward.

Portage Garage Sounds strives to become more than a record label: a facilitator, an arts incubator, and an opportunity. For now, PGS is building community–through ears, and into hearts, with sound.